Some throwback to Butt Lite IIIII and life in the Rally Van in 2008.

First bonus was the Forevertron in Prairie du Sac WI, which has been a bonus on many rallies. Points awarded.

Next the Rally Van stopped at the grave of home run record-holder (at that time) Roger Maris, in Fargo. If it isn’t a bonus, it should be. 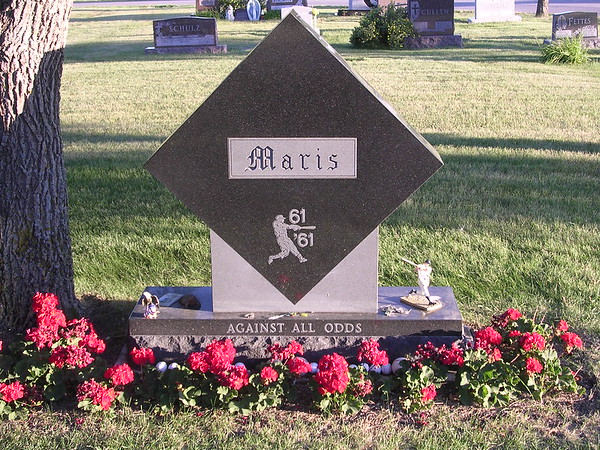 This was a giant pyramid made out of oil cans, which actually was a bonus on BL IIIII. So the Rally Van gets double points.

During Butt Lite IIIII, we were hearing excited chatter about this new rally called Hoka Hey, with a grand prize of $500,000 in Alaskan Gold to the winner. Well, Butt Lite had to get in on that action.

One of the bonuses leading into the North Dakota checkpoint was to visit the Spam Museum and pick up a souvenir. Those riders who picked up single-slice packs of Spam were invited to partake of their tasty pork-like delights for the amusement of the scorers.

It should be noted that two of the Spam eaters went on to win the Iron Butt Rally and another went on to be a top 10 finisher, so, maybe there’s a training idea there for riders.

Back on the road, the Rally Van visited the Enchanted Highway in North Dakota. Mostly, it was enchanted by mosquitoes. This is a rare photo of the Rally Van actually bothering to display the rally flag in the photo as required by the TeamStrange Uniform Rules. So, double points for the Rally Van for following the rules.

TeamStrange has an affinity for historical massacres, but this one may be over the top even for us.

Nothing like the peace and quiet of the Black Hills at Sturgis Rally time.

This is what it was like in the old days of rallying (10 years ago): Richard Buber trying to use a flashlight to illuminate something in a Polaroid bonus photo. That probably won’t work.

Bill Thweatt didn’t take it so well when he found out he had a photo of the Wrong Giant Bat.